The Samsung Galaxy A21s has previously gotten a few certifications including the Wi-Fi Alliance, FCC as well as Bluetooth SIG. The phone has now gotten certification from Thailand’s NBTC, hinting it will go official soon.

The Galaxy A21s has quite a number of model numbers, but the one that’s certified by NBTC bears model code SM-A21F/DS. 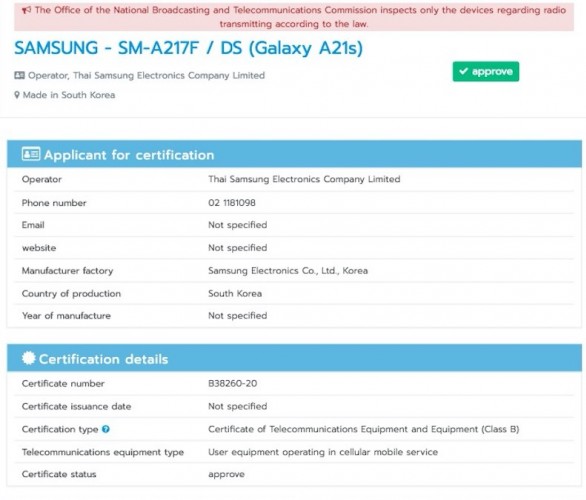 The Thai certifying authority’s website doesn’t quite show any specifications of the A21s. However, the smartphone passed through Geekbench last month which revealed important specs in the process: Exynos 850 SoC, 3GB RAM, and Android 10.

The Galaxy A21s will arrive in Black, Blue, White, and Red colors. It is set to have 32GB and 64GB storage options.

Rumors say the display is a 6.55-inch HD+ one and that the phone will pack four cameras including a 13MP selfie camera on the front and a 48MP main camera at the back joined by an 8MP ultrawide and 2MP macro units.

A 5,000 mAh battery will power the Galaxy A21s, which charges through a microUSB port.